For builders interested in obtaining plans, Contact me regarding obtaining a set.
While they are available electronically elsewhere, I can print, in their native E-size(36"x48"),a set of 42 sheets for $250 to cover my time and printing costs, including domestic shipping.
I accept wires, PayPal or personal checks (pending funds clearing) or cash.
Send me your shipping information including your phone number. I reserve the right to select request (prefer USA only). Allow 5-7 days for receipt.
I have added a page for directly acquiring printed documents. 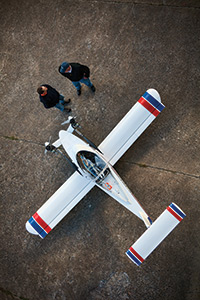 I asked my boss for permission to build a state of the art aircraft we are designing in an 'ultralight' version. He refused, so I decided to build a Cri-Cri. I contacted the designer Michel Colomban and requested plans, now available here. Since he does not support North America, I acquired a set of plans and am studying the design and building the aircraft in 3-D in SolidWorks, prior to building physical parts, to make sure there are no faults, and to understand the process, develop parts lists, order parts and order tools. It is my goal to create the entire aircraft as a solid model, for the use of others to benefit from my study. Later, we will be offering a kit, which will have sub-kits consisting of component sub-assemblies, like the horizontal stabilizer, Probably in 6 months.

I will be uploading eDrawings of my solid models for your evaluation and comments, along with photos of the project. So far I have purchased:

the nose wheel, horizontal stabilizer spar and skin, adhesive, riveting tools. Available as an eDrawing, the MC15-307 Horizontal Tail Assy has the spar completed, and available for download. Currently I am in the process of adding the HT ribs. Eventually, there will be a complete database with each part detailed as a solid model and a dimensioned 'drawing'. The hyperlinked .pdf plans, a printed copy, the manuals (re-written with improved understandability, and without colloquialisms), photos and narrative of my project will make this a 'simplified' build for any mechanical person. The safety record of the original MC15 is outstanding, and the design is exceptional. My plans will be unaltered from the originals apart from the modern solid modeling updating, to maintain the integrity of the design.

There are many great websites that you can grab details about the Cri-Cri, but it is world's smallest twin engine aircraft. I highly recommend the Yahoo group 'cricridrawings' where a number of folks in North America, and worldwide are faithfully constructing MC15's, apart from Michel Colomban's support, by his own choice. It has an empty weight of 172 pounds. You can fit 15, up to 30 hp engines each for a combined 30hp up to 60hp. The limiting factor is CG and engine mount strength, and Vne which is 160 mph to avoid flutter. The aircraft is ultimate load rated to 9 G's positive and 4.5 G's negative, so it is fully aerobatic! Many parts are available from various suppliers, including custom machined parts, from quality supply manufacturers. I will detail my construction as the build continues.

I would love to know how everyone 'stumbles' upon my site? I also would like to know where are you located and your age.. I will try to answer your questions as best I can. I have been a pilot for a long time. My greatest experience is as a hang glider pilot, but I also fly ultralights, airplanes and helicopters. The Cri-Cri is an amazing little aircraft. The cost will run you somewhere around $15,000 to $20,000USD. But the good thing is you can incrementally build the plane. Build one segment at a time as funds allow. The greatest cost is the 2-cycle engines which are about $2000USD or more each. I believe anyone can build a cri-cri, but having metal working experience is a plus. There are five manuals of instructions for building the aircraft. There is a Yahoo group cricridrawings which I recommend you join. There is a second Yahoo group called cricri which is of limited value as there are apparently few builders. I would recommend studying the construction manuals. I would also recommend joining the cricridrawings group and going to: http://groups.yahoo.com/group/cricridrawings/files/ One of the manuals will teach you EVERYTHING you need to know to build the plane is Cri-Cri Part 1 - General Operations. Any questions can be answered by the cricridrawings group or myself.
Perhaps you are aware of how to eat a whole elephant... one bite at a time. Generally speaking the machine is primarily made from 2024-T3 aluminum and 4130 chrome-moly steel. Our US continental supplier is Aircraft Spruce (http://www.aircraftspruce.com/) There is much good information on their site, like aluminum info. Generally people start by building the horizontal stabilizer, because it is similar in fabrication to the wing. There are currently about 10 cri-cri's under construction worldwide that I am aware of. You can put a shout-out on the cricridrawings group to see if there is anyone nearby to your location. The plans are not that complicated, but they do require a significant bit of study. I can explain them to you as you go. A good start is to take the .pdf to your local CAD or Architectural printers which is fairly expensive, and print them out on 'E'-sized paper which is 36"x48" but you will find they only use a portion of the page vertically(24"), but the whole page horizontally. I also printed a set for reference at A-size (8.5"x11") and another at B-size (11"x17") which I use primarily unless studying details. I have never flown one, and I think few people have, unless they have built one. I somehow do not think I would trust one I had built in very many people's hands. I won't be loaning mine out. It is rumored that it takes about 1500-2000 hours to complete a construction, which is pretty typical for a homebuilt. Wayne Butts in NZ took six years and just test flew his Dec 26 of 2008 (last year) (http://www.cricri.zoomshare.com/0.html) (see photos/vids)(His website has been recently updated). You will need a rivet gun, bucking bar, drill, drill press, bandsaw, and a bunch of other metal working tools. Most importantly you will need the commitment of time, money, desire to learn new things. If you do not have the previous sentence, you may as well quit now and build something else. Notice I did not say HAVE the money or the time or the knowledge, just the desire and the follow-thru to see completion. That applies to everything in life. It is not a beginner's project, but I think any beginner could build it since there is sufficient information to allow education and no one part is that difficult. Start with the horizontal stabilizer, sheet MC15-307 Horizontal Tail-Assembly and Details and study it. Also download the eDrawings Viewer from http://www.edrawingsviewer.com/pages/programs/download/index.html and install it. I will be issueing updated drawings of parts as I create them which will give you the ability to visualize parts in 3-D. See the attached files of the yet to be completed horizontal stabilizer and the MC15-307-04 Tail,horizontal,pivot fitting. The little music symbol on the plans indicates adhesive. Look down on the lower right side box, the 'Title Block', and there is a numeric listing of all the parts required on the sheet and the materials it is made from.
The downfall of the Cri-Cri is it is a one-seater, it is very weight conscious, and it is VERY center of gravity critical. It's empty weight is 172 pounds. Even though you are tempted, you cannot put anything behind the seat. I would study the manual entitled "CriCri Part 1 - General Operations (Construction Techniques).pdf" which will teach you about reading the plans, tools required and how to use them and general aircraft building information. You can skip the part about how to build your own bandsaw as you can now get them off eBay for a song. That should get you started in the right direction..
-Christian

Go to bottom of page for updates

The good guys always rideXXXX, uh, fly off into the sunset...